Investing in families to improve fiscal sustainability: responsibility and responsiveness after Covid-19

The Italian newspaper “Domani” recently published a contribution by Anton Hemerijck and Jan Karremans discussing family policy investments in the Italian context, pointing out some key lessons we may want to consider to promote growth and budget sustainability. We share below a short synthesis of the piece.

After the Great Recession, Italian politics has been characterized by an increasing divide between responsibility and responsiveness. On the one hand, political actors have been able to attract voters’ preferences with slogans and promises. On the other, governments had the responsibility to guarantee public finances sustainability and work in the general interest of the population. Not always these pressures went in the same direction.

Lately, however, the changing political landscape in Europe seems to suggest a rapprochement between electoral and governmental demands. While after the Eurozone crisis the Monti cabinet was urged to cut on public budgets, the current Draghi government is urged to plan productive investments. Therefore, the trade-off between responsibility and responsiveness is less evident than before. For instance, raising the number of social security contributors is a shared interest for both responsive and responsible governments. In Italy, though, low fertility rates constitute an obstacle to the goal of increasing social contributions.

Since Covid-19, economic policy seems no longer to be focused on spending review and austerity. On the contrary, it will likely be centered on productive investments and there will therefore be room to spend in the social sphere as well.

Based on the experience of Scandinavian and some Northern European countries, which between the 1990s and 2010s invested in parental leave and early childcare policies, the first step to improve fertility rates is to favour women’s access to the labour market. Together with satisfying a basic right for the female population, this effort would be instrumental for increasing the number of contributors in the short term, thereby enhancing welfare sustainability in the medium and long term. Unfortunately, Italy ranks at the bottom of European countries as regards female employment rates. 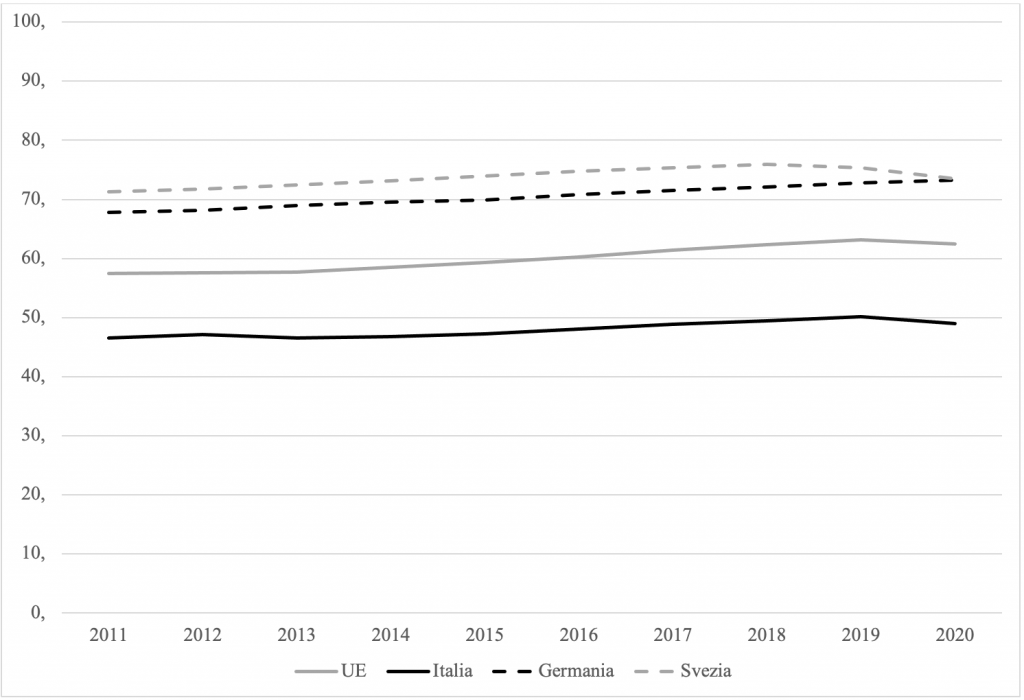 Employment rates (% of the working-age population) in the EU, Italy, Germany and Sweden (source: Eurostat)

By contrast, the German case constitutes a positive example. Whereas the country started from a similar position as Italy in the 1990s, after generous investments on leaves policies it managed to boost its employment rates from the 2000s onwards. Today we observe a circa 20 percentage point difference between the two countries as regards female employment. Between 2000 and 2010, Germany got closer to other Scandinavian welfare states characterized by relatively high female employment and fertility rates.

High employment rates go hand in hand with active labour market policies that favour work-family reconciliation. In Germany and Sweden, emphasis has been put on parental leaves at very generous replacement rates; in the Netherlands, the state covers childcare expenses for young families. Recently, Italy has taken some important steps in this direction, with the extension of the fathers’ leaves to four days and stronger provisions for a fair distribution of care responsibilities between parents. The recovery Fund also foresees the extension of the national childcare infrastructure and measures to stimulate the still too low childcare subscription levels (at 26% in 2018).

An increase in female employment could start a virtuous circle, improving economic security in the household while enhancing fiscal sustainability on an aggregate level. Higher fertility rates ensure that the number of contributors is stable in the long term. Investing in work-family reconciliation is thus a way to respond to both social demands and national economic interests.